Samgyupsal places can be found all over the Philippines wherever you will go. North, South, West, East, you can found one anywhere mostly just offering Korean BBQ. But only few offers a real authentic Korean BBQ that will satisfy your Korean cravings.

Recently before Christmas day, I’ve been to Marikina with some foodie friends to try the newly opened Korean BBQ Buffet Resto, the Samgyeop Mania.

Samgyeop Mania opened last November 28, 2019, just in time to welcome the Holidays. While in usual Samgyupsal restos they only offer Korean BBQs, at Samgyeop Mania, they are offering unlimited Korean BBQ and Shabu Shabu in one.

The Food. Samgyeop Mania offers different types of side dishes on their buffet, but they make everything temporary as they make sure to change and update their menu on a daily basis so customers won’t get tired of the usual choices even if they go for Samgyeop Mania daily. Nice concept and really advance thinking makes such a good outcome.

Samgyeop Mania offers wide range of side dishes, served fresh everyday, at the time of our visit they’ve served 18 side dishes from the buffet. Their lettuce are oh so fresh and their sauces are really great.

As mentioned, aside from Samgyup, Samgyeop Mania also offers Shabu Shabu which has unlimited of everything below👇

Listed down below are the side dishes and meat Samgyeop Mania offers the day we visited them.

FOOD TO GO. Aside from their unli Shabu Shabu and Samgyupsal, Samgyeop Mania also offers FOOD TO GO choices for people on the go and would want to enjoy their food at home or bring it to anywhere they’d go.

The Price. Samgyeop Mania price ranges from 399 for Pork alone and 499 for combination of Pork and Beef meats.

And aside from their Samgyeop and Shabu Shabu unli buffet customers can also order A la Carte meals from their Food To Go choices starting at 150 up to 250 pesos only.

While their drinks and dessert ranges from a minimum of 30 pesos for the Melona Ice Cream and 220 for the Soju. 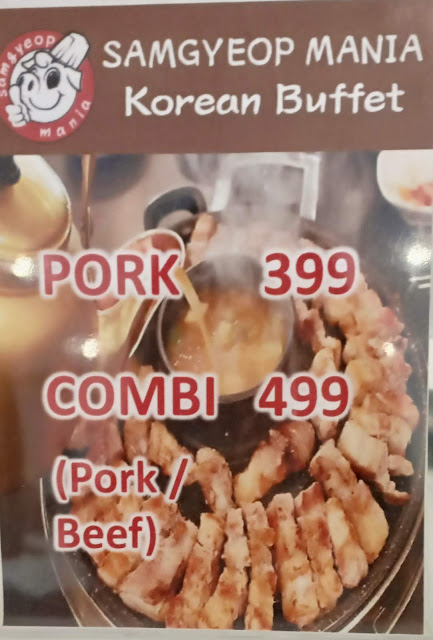 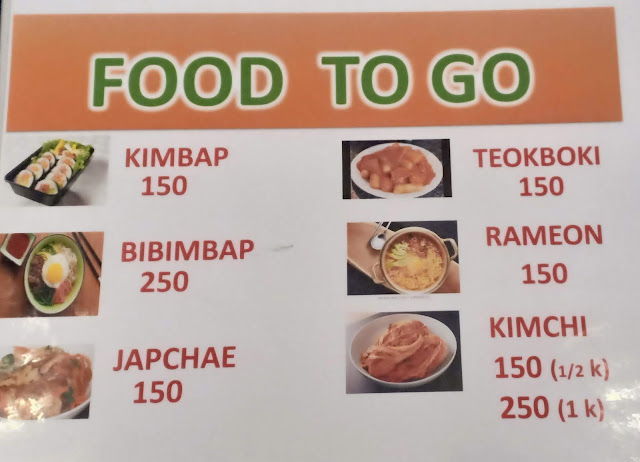 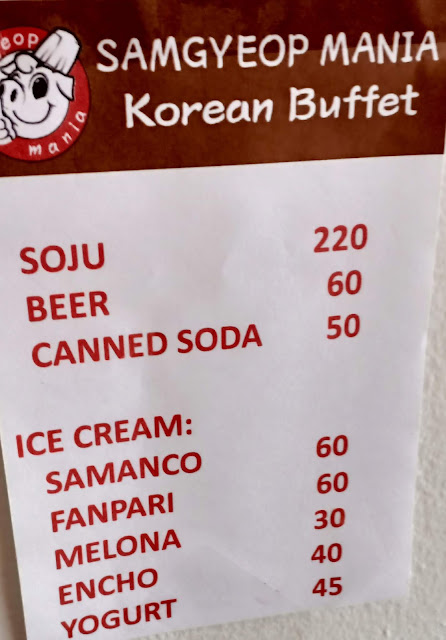 The Place. Samgyeop Mania is conveniently located at Graceland Plaza in Marikina and can be easily found as it is located along the road of J.P Rizal St. in Marikina. The resto can accommodate approximately 50 to 60 pax in one seating.  They have a clean and cozy place and white ambiance that you’ll feel relaxed once you enter the resto. Plus a cute logo of a piggy on thumbs up, that will make you give a thumbs up on their food after you experienced Samgyeop Mania.

What to Expect when visiting Samgyeop Mania?

✔But they might add marinated meats to their menu in the future.

✔Discounts are given to guest 10 and up

❌They don’t have cheese for the grill.

❌They don’t have marinated meats as they are offering authentic korean BBQ.

Overall Samgyeop Mania in Marikina City got an overall rating 🖤🖤🖤🖤🖤. Must try Samgyupsal place to visit when you’re travelling to Marikina. Especially if you’re craving for a Samgyup and Shabu Shabu and you’d want to have it in one place. Their food are fresh and you’d feel the korean vibe once you’re on it.

Empowering SMEs and the Franchisees.

March 10, 2020
The Bank of the Philippine Islands (BPI) recently signed a memorandum of agreement with the Philippine Franchise Association (PFA) to serve as the exclusive...

Pookaberry Cafe giving you a healthier food option but with the...

Never miss a beat with the latest Originals member, the Nokia...